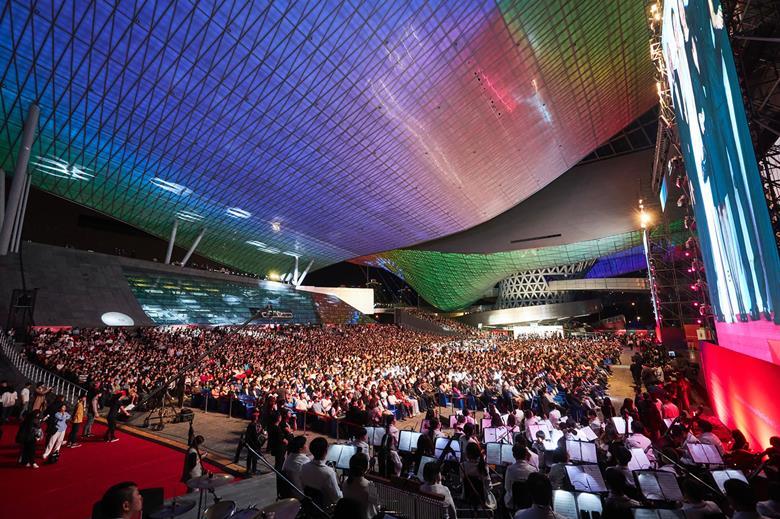 Designed by Austrian architectural firm Coop Himmelb(l)au specifically for the festival’s use, the centre’s renowned cantilever roof is lit up with rainbow-coloured LED light displays and opening night would traditionally also see a fireworks show in the South Korean port city.

But, like other festivals around the world, BIFF has had to contend with adjusting and mapping out ways to keep people safe in the Covid-19 global pandemic. Among other measures, the festival has opted to cancel its opening and closing night ceremonies, red carpets, midnight screenings (which would run all night) as well as outdoor talks and receptions – in addition to pushing its dates back a fortnight to run October 21-30.

“It was very hard to get a sense of the situation since it kept changing, but for us, Chuseok was important. We decided to wait until after the [two-week] incubation period and open on the 21st with the caveat that if there was another outbreak, we would cancel,” says festival chairman Lee Yong-kwan.

The harvest moon festival of Chuseok is traditionally a major migratory holiday for families to gather in Korea. Following the lunar calendar, this year the three-day national holiday fell September 30-October 2, and with the country at Level 2 in quarantine measures before that, many raised concerns that another outbreak could occur. Fortunately, the daily numbers of confirmed cases stabilised and South Korea’s government took the country back to Level 1 on October 11.

“But we decided to take it as Level 1.5 to 1.9 and prepare accordingly,” says Lee. “Regular cinemas can take 50% of their capacity and public buildings in Busan can take 30%, but we have decided autonomously to run our cinemas at 20-25% capacity.”

The festival also decided to hold its screenings solely in the Busan Cinema Center where they could guarantee safety measures, and also because the changeable situation made it difficult to plan ahead with the commercial cinemas such as the nearby Lotte and CJ CGV that BIFF usually works with. Even though it has downsized the selection from around 300 films in recent years to fewer than 200 this year, each film will only be able to screen once on the centre’s five screens.

“Fortunately, the screenings are spaced with an hour between them, so we can disinfect and air out the cinemas every time,” says Lee. “Masks are mandatory and we encourage audiences to wear KF94 masks. Temperature checks, QR codes [for contact tracing in case of infections], and distancing will all be upheld and we are asking people to only bring in drinks with tops and to drink quickly before putting their masks back on right away.” (Food was already prohibited at festival screenings before the pandemic.)

The festival will open with a socially-distanced world premiere of omnibus Septet: The Story Of Hong Kong, directed by Sammo Hung, Ann Hui, Patrick Tam, Yuen Wo Ping, Johnnie To, Ringo Lam and Tsui Hark, and video presentations.