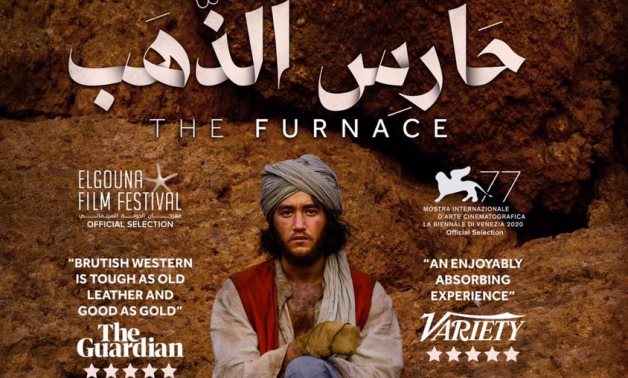 Highly anticipated Australian film The Furnace will have its Arab world premiere during the upcoming 4th edition of El Gouna Film Festival (GFF) which will kick off its activities on Friday 23rd October.

The film landed its world premiere at the 77th Venice International Film Festival (2-12 September 2020), where it premiered within the festival's Orizzonti section.

The film has immediately gained international critical acclaim, and was described as “an enjoyably absorbing experience” by Variety and “Brutish western is tough as old leather and good as gold” by The Guardian.

Actor Ahmed Malek also received positive reviews on his performance in the film: “Egyptian actor Ahmed Malek (a Screen Star of Tomorrow in 2018) is immediately engaging as Hanif…"  stated the Screen Daily.

The Furnace explores a forgotten aspect of the 19th century west Australian gold rush, when Muslim and Sikh camel handlers from India, Afghanistan and Persia – Iran's former name – were brought in by British colonisers to help open up the Outback, many essentially working as indentured laborers.

Directed by Roderick MacKay, The Furnace follows the story of a young Afghan cameleer played by Malek, who is led away from his friendship with local Aboriginal people by a shifty gold prospector.

"It's shining a light on a little-known chapter of our history and representing community groups who have not really been represented in Australia's history,'' the 33-year-old director told The Associated Press after the screening.

The Furnace is Malek's first appearance in an international production. He is best known for his role as the young Hassan El-Banna in the series 'The Brotherhood', as well as Ahmed in the series 'With Premeditation', and as teenage womaniser Adham in the TV series 'Hayat’s Tale', for which he received recognition from Middle Eastern audiences.

His latest films include 'Ras El-Sana' by director Mohamed Sakr and screenwriter Mohamed Hefzy, which is currently available on shahid.net, as well as 'The Guest' (2019) and 'Gunshot' (2018).

In 2013, Malek won a DG Award for Best Young Actor in recognition of his performance as Ahmed in 'With Premeditation'.

In its 2018 edition, the Berlin International Film Festival announced Malek among its Berlinale Talents.