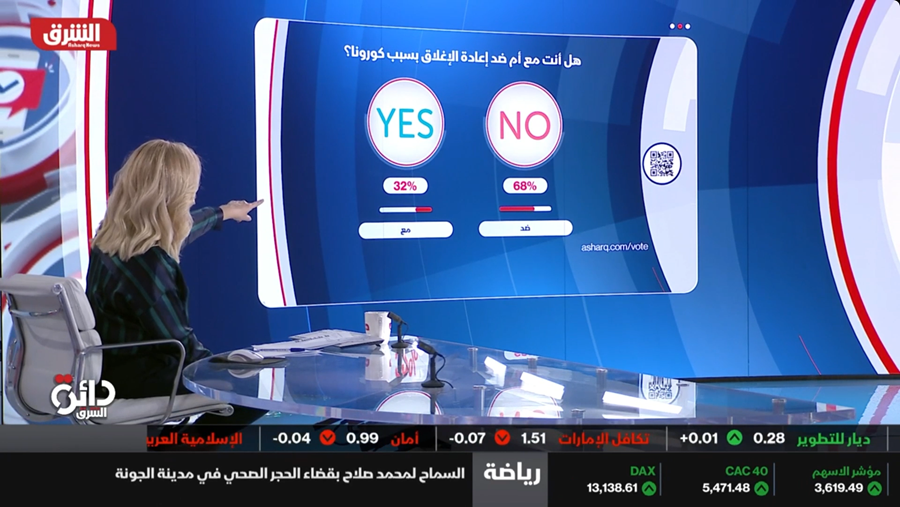 Since its launch on November 11, Asharq News, a multiplatform Arabic-language news service providing 24/7 coverage across the Arab world and beyond, has broadcast live from its studios in Dubai. Asharq News is distributed across a broad range of media platforms, and Megaphone TV plays a key role in creating a frictionless interactive viewing experience for its audiences.

In Asharq News broadcasts, viewers join the show knowing they have a voice through Megaphone TV's Viewer Engagement Platform, which allows users to respond to real-time polls in live lower-third graphics, participate in instant quiz competitions, have their social comments brought seamlessly on air to power newscaster responses, engage in second-screen chat, as well as join a loyalty programme. Hosts respond regularly to viewer sentiment and showcase audience messages on air, allowing people at home to join the broadcast in a completely new way. Conversations are more personal and more engaging than in traditional news programmes.

Dr. Nabil Al-Khatib, General Manager of Asharq News, said: "At its core, Megaphone TV is a means to ask our viewers what they think or what they want, or invite them to a poll. From there, we act on that information, as we are constantly looking for new ways to engage with the audience and let them feel their impact on our news programmes in real time."

With the launch of Asharq News, Megaphone debuts its service in the very dynamic MENA region.

"The Middle East is a vibrant news environment, with audiences looking to engage across multiple platforms. An informed news viewer in this region is no longer a passive receiver of information, but an active participant in social media discussions and now part of the broadcast discussion as well. We couldn't be prouder to launch in the region with veteran journalists like Dr. Al-Khatib and in partnership with a news brand such as Asharq News," said Dan Albritton, CEO and founder of Megaphone TV.

The viewer experience of an Asharq News broadcast is that of doing something together, not just watching. Even people who don't directly participate are a part of the action by simply being there. The audience is no longer invisible, passive, or imaginary. They are now part of the show.