Netflix No. 2 TV Group in Europe in Revenue 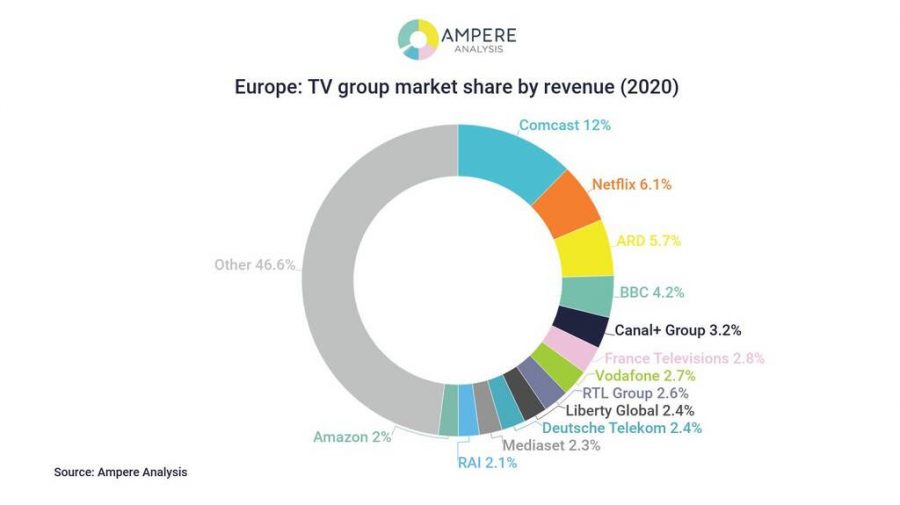 The Netflix star just gets brighter. New data from Ampere Analysis reveals that the SVOD behemoth became the second largest TV group in Europe by revenue in 2020. Comcast, through its acquisition of satellite TV operator Sky, is the Euro leader with 12% market share compared to Netflix’s 6.1%.

“Since launching in 2012, Netflix has grown rapidly in Europe,” analyst Tony Maroulis said in a statement.

Indeed, by 2016, Netflix had launched its services across much of Europe and surpassed $1 billion in revenue. By 2017, it had the largest customer tally of any subscription TV business in Europe. And by 2020, Netflix had overtaken German public broadcaster ARD.

It would seem that there is no limit to Netflix’s meteoric rise as the streamer continues outsized foreign growth, and helps itself to a greater portion of the audio-visual revenue.

“While Netflix has enjoyed success across the continent, local broadcasters are facing increased pressure,” said Maroulis. “The coronavirus pandemic has thrown the TV advertising market into decline, compounding and accelerating the woes of traditional and established brands. And while Netflix’s pockets are getting deeper, local entities are struggling to compete.”

Ampere contends that over the next few years, Netflix alone is set to be better funded than many leading commercial broadcasters, and its scale means that it is able to produce quantities of high-quality content that most of its local competitors cannot match.

“This global vs. local imbalance will further accelerate the online viewing shift, which is now beginning to shift to older demographics as well as young,” Maroulis said.