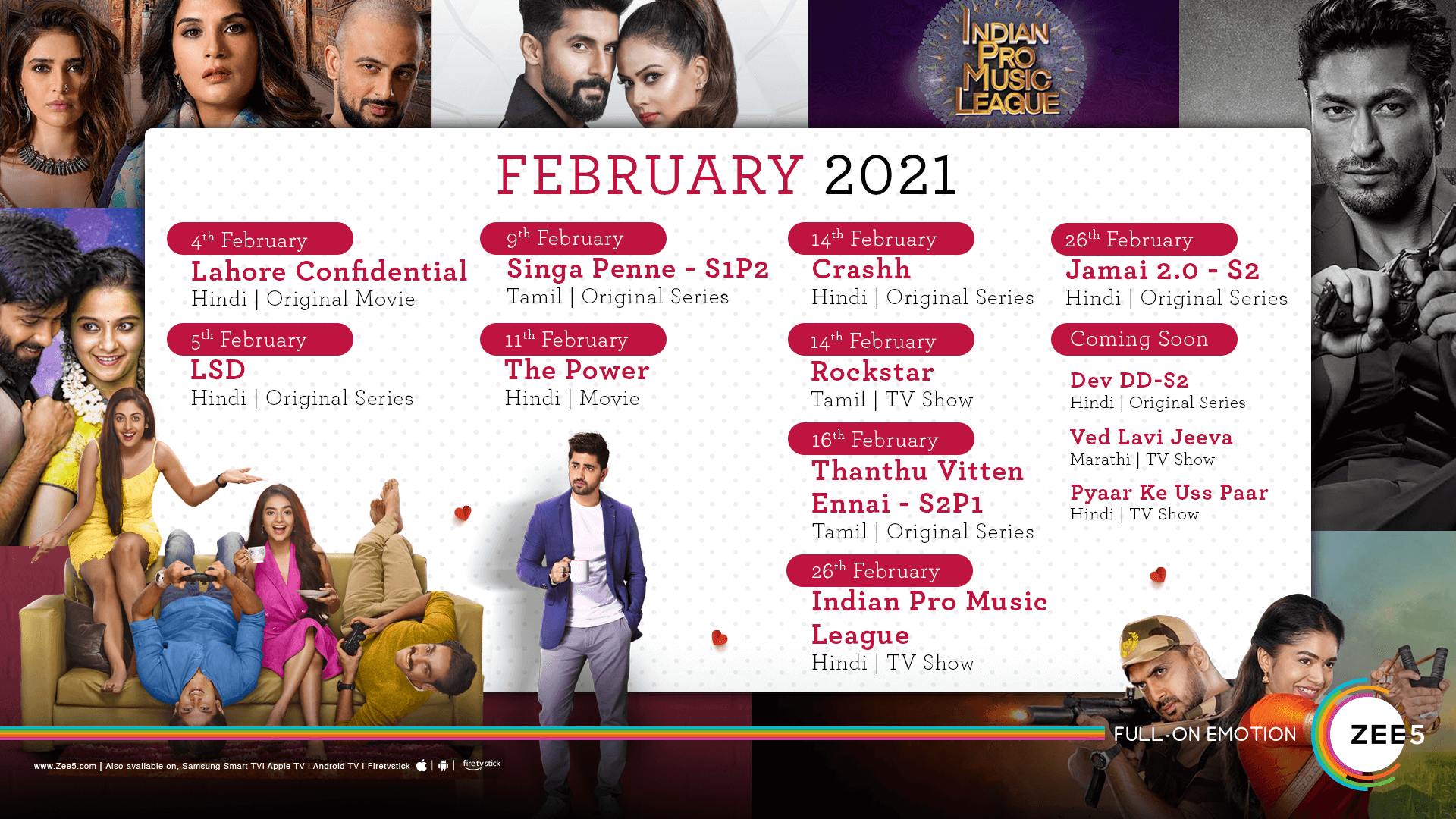 The slate was kicked off with the World Premiere of ZEE5 Original Lahore Confidential on February 04, a thrilling love story of two spies. Created by India’s most prolific crime writer S.Hussain Zaidi, the film marks the directorial debut of Kunal Kohli in the OTT space. Lahore Confidential stars a powerful ensemble trio of Richa Chadha, Karishma Tanna and Arunoday Singh.

Next up, a crime thriller series that unfurls in a hospital. The ZEE5 – ALT Balaji venture, LSD releases on February 05. Starring Rahul Dev, Puneet Pathak, Siddarth Menon, Shruthy Menon, Tanaya Sachdeva and Srishti Rindani, the series is based on the lives of five medical interns.

Leads from the blockbuster digital hit, ZEE5 Original Yaara, Vidyut Jammwal and Shruti Haasan are getting back together in the upcoming thriller, The Power. Packed with drama, suspense and adventure, The Power is slated to release on February 11.

Starring an ensemble cast of popular young Indian television stars, Anushka Sen, Kunj Anand, Aditi Sharma, Rohan Mehra and Zain Imam, Crashh, another ZEE5 – ALT Balaji joint venture, will stream on the platform from February 14. The family drama essays the heart-warming story of four siblings who get separated during a fateful accident, and their journey to find each other.

Based on Sarat Chandra Chattopadhyay’s novel, the ZEE5 – ALT Balaji series Dev DD will roll out its second season on February 20. Conceptualized and produced by Ekta Kapoor, DevDD casts Jhankar Beats star Sanjay Suri metamorphically in the shoes of Chandramukhi.

ZEE5 will also announce the winners to their Global Content festival which attracted a massive aggregation of entries across languages from multiple markets. The festival aims to give a platform to young and new filmmakers to showcase their potential. The winners of the Festival are expected to be announced by the end of this month.

Along with this, the entertainment giant will stream the first-ever league format non-fiction music show – Indian Pro Music League. Set to kick-off on February 26, Salman Khan is the brand ambassador of this star-studded show. The League will see six teams supported by some of the biggest Bollywood and sports celebrities and the most revered musicians battling out to find fresh voices from the various states of the country. The musical extravaganza will have teams led by the likes of Mika Singh, Shaan, Ankit Tiwari and Kailash Kher and supported by celebrities such as Rajkummar Rao, Shraddha Kapoor, Govinda, Riteish Deshmukh & Genelia, Bobby Deol and Suresh Raina.