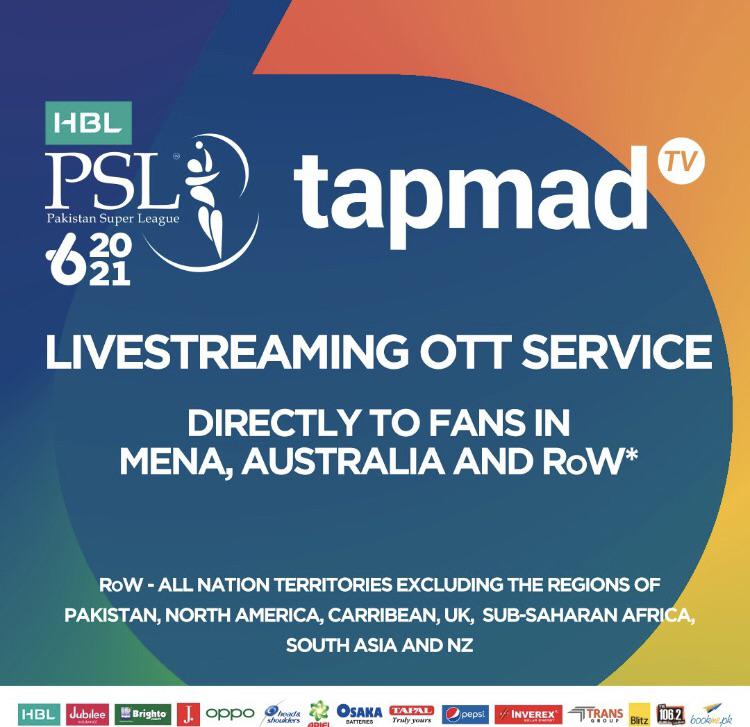 The Pakistan Cricket Board has joined hands with tapmad TV for streaming of the HBL Pakistan Super League 6 matches in Australia, MENA (Middle East and North Africa) regions as well as the RoW* (Rest of the World).

The partnership is another major breakthrough for the PCB as it increases the reach of Pakistan cricket through one of the most popular T20 leagues, the HBL PSL.

This partnership will help further extend the HBL PSL’s coverage while ensuring viewership for the league in the key cricketing markets of MENA and Australia.

The partnership allows for ease of access to fans around the globe, while keeping in mind commercial sustainability of the rights for the PCB and its partner HBL PSL franchises.

The live stream will be available on www.tapmad.com/psl6. tapmad TV is available as an app on the iOS | Android | Samsung TV and Android TV stores as well giving Pakistan cricket fans the access to follow the coverage through their preferred mode and device.

The opening match of the HBL PSL 6 will be played between defending champions Karachi Kings and 2019 champions Quetta Gladiators at the National Stadium Karachi.

The final will be played at Lahore’s Gaddafi Stadium on 22 March. A total of 34 matches will be played in the month-long event which will be staged in Karachi and Lahore.