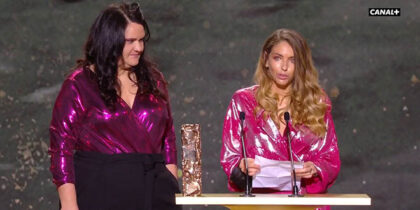 New consecration for Sofia Alaoui. The French-Moroccan director has just won the César for best short film for her “What if the Goats Die?”

The award was handed to Sofia Alaoui at France’s 46th César ceremony, held Friday night. Sofia Alaoui was thus ahead of “L’Aventure atomique” by Loïc Barché, “Baltringue” by Josza Anjembe, “I will be among the almonds” by Marie Le Floch, and “A farewell” by Mathilde Profit.

The Cesar for best first film went to “Two of Us” by director Filippo Meneghetti.

In her speech, the young director paid tribute to her mother. “Mom I can’t thank you enough for always believing in me when everyone wondered what was going to become of me,” she said.

Written and directed by Sofia Alaoui and produced by her company Jiango Film with the help of the Moroccan Cinematographic Center (CCM), “”What if the Goats Die?” takes place in the high Atlas Mountains where Abdellah, a young shepherd, and his father are stranded by snow in their fold.

As their herd were starving, Abdellah had to go look for fodder in a trading village more than a day’s walk away. When he arrives at the village on the back of his mule, he discovers that the village has been deserted because of a mysterious event.

The film, released in 2019, had won the Grand Jury Prize of the Sundance Festival (US, January-February 2020), considered to be one of the major events of independent cinema in the world.

After grabbing the French Cesar, “So What if the Goats Die” will continue its course in April 2021 as it has been nominated for the Oscars Awards.